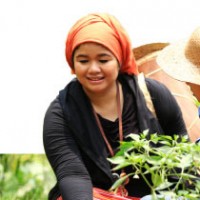 In 1998, she completed a Master of Law on Intellectual Property Rights at Kings College, University of London. Inspired by Indonesia’s wealth on food biodiversity and indigenous knowledge on sustainable food system, in 2008 Helianti left her works as consultant and founded PT. Kampung Kearifan Indonesia, known also as JAVARA. She was awarded EY Indonesia Social Entrepreneur of the Year 2013.

In 2014 she was named by Forbes Indonesia among The Inspiring Women Honor Roll, and in 2016 by Top 10 Asia as one of Indonesia’s Top Social Entrepreneur. She is globally recognized as a notable expert and resource person in the area of indigenous food system, commercialisation of food biodiversity and social entrepreneurship.