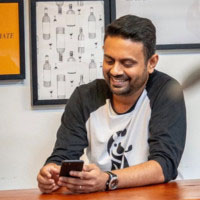 Acknowledged as one of Singapore’s top digital agency leaders, Raj embarked on his entrepreneurial journey in 2002, by co-founding Comwerks at 21. Within 3 years, eBay added the agency to its roster becoming one of its largest clients. In recognition of the early achievements of Comwerks, Raj was awarded the leading Youth Entrepreneur of the Year by DBS/SICCI in 2007. He was interviewed on ‘Young Turks’, a CNBC programme featuring Asia’s promising young entrepreneurs.

Raj then led the acquisition of Comwerks by WPP in 2010 and continued as CEO. He helped set up Zed Academy, with the support of EDB, to train young graduates from local universities on Digital and Mobile, increasing the available talent pool within the industry. In 2014, after running one of WPP’s most profitable units, Raj wanted to leave but was persuaded to stay and was appointed Group Managing Director.

He then led the Group’s largest digital businesses such as Wunderman, Enfatico, AdPeople and Comwerks. He also helped to set up and established WPP’s Government and Public-Sector Practice and was part of the WPP faculty in Lee Kuan Yew School of Public Policy. Prior to this, WPP only offered the program as part of the Master of Public Policy at University of Oxford.

In 2013, Raj was the overall winner of the DBS/SICCI Entrepreneur of the Year Award as well as the overall winner of the OCBC/ASME Young Entrepreneur of the Year Award. Raj, represented Singapore in Cricket, both as a player and recently as the Team’s manager. In Dec 2016, Raj left WPP to fully devote himself to his next venture, Zeemart, a platform that was created to help F&B businesses save costs.